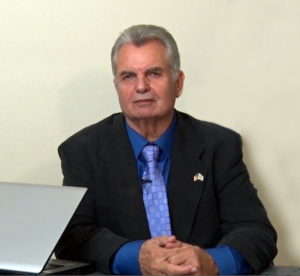 Born in London England, moved to Israel with my parents as a child, after school and mil. service, worked for Israel Educational TV, then moved to Florida to found and produce the Shalom Show on TV on the air since 1979.

We look forward to reaching an increasing audience worldwide to thereby more effectively share positive and fair in-depth programs that enlighten a broad spectrum of viewers, including members of all faiths.

The Shalom Show® is dedicated to informing the public about Israel and Jewish life. About friends and history, technology and tourism and about the achievements, challenges and hopes for peace. A cause today that is more essential than ever.

We’ve had Toni Holt Kramer and Robin Bernstein on the show, broadcast on ABC TV-25 in Palm Beach and nationwide on DirecTV, Comcast, Time Warner and other networks reaching over 45 million homes, with national coverage across the USA, with 9 million “Unique Viewers” per month, presenting an impartial variety of subjects and views. The Shalom Show® has a long track record of credibility and name recognition and is honored to be regarded as the premier Israel/Jewish TV show in the USA; on the air continuously since 1979.

We feature special reports and in-depth interviews with American, Israeli and other leaders in politics, business, technology, medicine, education, culture, entertainment and other topics, generally focusing on positives and the achievements of the State of Israel and friends of all faiths, sharing a vision of peace, inspiring solutions and progress. Some of our shows focus on politics and throughout our many years of programming, we impartially feature politicians from left and right, Republicans and Democrats, to offer a broad spectrum of ideas and viewpoints, as we do in all subject areas.

My name is Therese Foy. I’m a Registered Travel Nurse living in Lantana, Florida. I’m a full supporter for Donald Trump. I would like to help him and be involved in whatever it takes to continue his positive momentum.

To support Donald Trump in continuing to help the American people.

I am co-founder (with my wife Susan Bryenton, a Trumpette) & Chief Business Officer of The Litchfield Fund, our family investment firm that invests in the natural & organic food/beverage & health industry. As part of our corporate responsibility, we intend to return a portion of profits to organizations & educational programs that support American Farmers, as farming is part of our family heritage!! We now live in Scottsdale, Arizona & want to see America Great Again!

President Trump is well on his way to restoring America’s values & greatness! We need to support him in every way over the next 7 years to assure that the economic, security, international & domestic progress he has made continues!

While I’ve been a long time admirer of Donald Trump, his presidency has made a strong impact on our country and the world we live in. I want to stand in union with other female supporters in his continued success and re-election.

I am a graduate of the University of Miami class of 1992 with a degree in Finance and I was honored to be selected as UM Homecoming Queen in 1991. I also have participated in many Beauty Pageants including winning the Ms. Teen Florida Pageant in 1989. I have been active in my community, serving as the Chairman of the Seminole State Community College Board of Trustees and the Board of Directors of the Woman’s Club. I am also active in supporting Helpful Hands as a Board Member, which is a Charity in Central Florida. I am married to my husband Jim, who is the President/CEO of several successful companies and I am the proud Mother of 5 children, Amber, Hunter, Austin, Aidan and Hope.

I and my husband have supported President Trump from the time he announced his candidacy for the Presidency and we believe that being an outsider to the Political environment is a major benefit in his ability to govern the United States and promote and protect our Nation’s National Interests. “Drain The Swamp”